Sunrun (RUN) has firmly established itself as a dominant force in rooftop solar. Sunrun recently completed its acquisition of Vivint Solar (VSLR), further cementing Sunrun as a leader in the fast-growing industry. While everything appears to be going Sunrun’s way, the solar giant is likely to face its biggest hurdle yet in the form of Tesla (TSLA).

Sunrun has been on a major upswing this year. The company is now one of the most valuable solar companies in the industry.

While Tesla has long made its solar ambitions known, the company has had a relatively small impact on the industry over the past few years. Solar pure plays like Sunrun and Vivint Solar have historically been the most dominant players in rooftop solar. However, the entire dynamic of the industry is likely to change with Tesla’s growing focus on solar.

If Tesla’s battery innovation comes anywhere close to the pace set out by its roadmap, the company’s dominance in this industry is all but assured. In Q3, Tesla deployed a whopping 759 MWh of storage, which represents 59% Y/Y growth. The company also deployed 57 MW of solar during the quarter, which increased 33% Y/Y.

While Tesla’s solar business is still smaller than that of Sunrun, which reported 78 MW of solar deployments in Q2, Tesla has far more resources and advantages than Sunrun. Tesla, for instance, can afford to spend far less on sales and marketing compared to Sunrun, which has allowed Tesla to offer some of the cheapest rooftop solar prices in the industry.

Tesla’s ability to manufacture industry-leading battery technology will give the company a huge edge when it comes to solar.

Although Sunrun is one of the largest solar names in the industry, the mainstream still has little awareness of Sunrun’s brand. On the other hand, Tesla is rapidly becoming a household name thanks to its outsized success in the EV market. Given how expensive sales and marketing is for rooftop solar, having a highly recognized brand will be increasingly important moving forward.

Tesla’s highly recognizable brand has allowed the company to spend a relatively small amount on the sales and marketing aspect of its solar business. This is what has allowed Tesla to reduce its residential solar retrofit price to an industry-low of $1.49 per watt (after tax incentives). It will likely be increasingly hard for Sunrun to compete with Tesla on price.

Sales and marketing continue to play a large role in the rooftop solar cost structure. 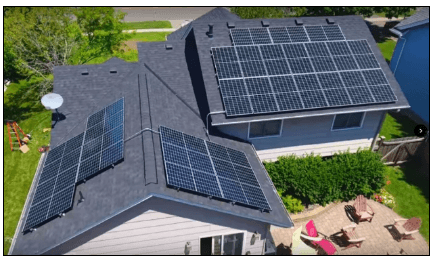 While Tesla could very well upend the residential solar industry, the company is also focused on a number of other large industries. This means that only a small percentage of Tesla’s resources will be focused on solar. Moreover, any disruptions in the company’s EV business could cause Tesla to pull resources from its solar department, which is a scenario that has already happened in the past.

Sunrun is wholly dedicated to its solar business and is now one of the largest solar pure plays in the entire industry. If Tesla does not gain significant traction in residential solar, Sunrun could very well become the dominant long-term force in residential solar. However, Tesla now has more than enough resources and time to focus on its solar business now that its EV business is firing on all cylinders.

Tesla’s renewed focus on its solar business will likely have a large negative impact on Sunrun. Sunrun is not equipped to deal with the resources and innovation of a company like Tesla. Even the combined force of Sunrun and Vivint Solar will likely do little to slow Tesla’s momentum in solar.

Sunrun is currently valued at $11.3 billion at a P/S ratio of ~8.3, making it one of the largest solar companies in the industry. While Sunrun is currently a leader in a high-growth industry, the company is facing unprecedented threat in the form of Tesla. Sunrun is likely overvalued at this point considering the changing competitive landscape in residential solar.

Disclosure: I am/we are long TSLA. I wrote this article myself, and it expresses my own opinions. I am not receiving compensation for it (other than from Seeking Alpha). I have no business relationship with any company whose stock is mentioned in this article.

Parents Of 545 Children Separated At U.S.-Mexico Border Have Not Been Located