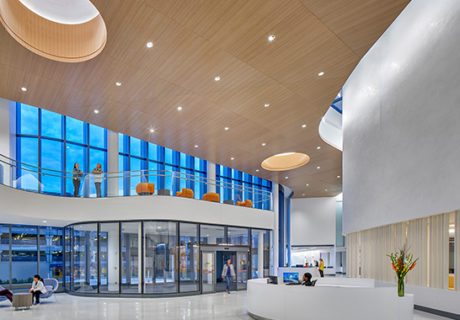 Who he is: Christopher Hoy started his career in the private construction industry before joining the University of Virginia (UVA) in 1997. His first UVA project was a total renovation of the emergency department (ED) at University Hospital, where he says he quickly recognized the importance of maintaining a high level of patient care even amid the chaos of construction. More than 20 years later, he was again charged with improving the facility, this time as the owner’s representative for the largest, most complex project ever delivered at the institution. The University Hospital Expansion project started design in 2014, with a phased completion from 2019-2021. The project includes the addition of 425,000 square feet to the hospital as well as the renovation of 95,000 square feet of existing space, including the ED. Hoy not only led the project for the organization but established the working culture of the team building it, a culture that his nomination credits for the project’s success.

Year in review: Hoy’s initiatives begin with the Big Room, a co-location space where core team members representing the owner, contractor, and architect worked together six days a week during the six-year project. There, they established a shared vision and built trust that worked to expedite resolution of even the most complex issues, including managing medical equipment changes that impacted all procedure rooms as well as phasing turnover and occupancy of the building. Hoy also stressed engagement with the community by having the project team organize and host a benefit for a local charity each year and lead volunteer activities ranging from building dog houses to donating coats and toys to sponsoring a 10K race. The environment he fostered not only benefitted the project overall but the team’s ability to respond quickly to the COVID-19 pandemic. Serving as the conduit between organizational leadership and the project team, he’s credited as playing a crucial role in developing, approving, and executing critical solutions. For example, he orchestrated the on-site team to develop plans to convert portions of the expansion project for the treatment of COVID-19 patients, guiding them in responding to leadership requests for negative pressure rooms with alternative exhaust mechanisms. Ultimately, the solutions implemented made all patient rooms and 12 intensive care rooms available, with the first positive patient moved into the hospital eight days ahead of the scheduled completion of the COVID-19 rooms.

Industry impact: A collaborative project team environment has long been touted as beneficial to both shortening schedule and reducing budget. But Hoy’s leadership on the University Hospital Expansion project demonstrates additional value of a well-integrated team. As he says, “This project is a great example of what can happen when folks collaborate and respect and trust one another. Six years of relationship and trust building on this project allowed us to do in 19 days what would have taken six months to accomplish.” In either a traditional or pandemic scenario, Hoy’s efforts to understand the impact of his work on individuals delivers results that contribute to the community at large, including patients, staff, and his fellow team members.

Social media accused him of ambushing two deputies. It was fake news, but he’s paid a steep price